A downloadable game for Windows

THIS GAME IS A PROTOTYPE AND IT WAS MADE IN ONE WEEK!

A bigger, better version of this game is coming out January 22, and it will have more pants, more sounds, brighter colors, and a less nauseating camera!
Thank you so so much for playing this small version of it and I really hope you enjoy the big one when it is finished!

After ripping your pants at work, you need to sneak out of the office and go to the clothing store across the street to get new pants.

This game was made in a week! I would love any and all feedback :D

WASD or Arrow Keys to move

Still cool and it's funny how the old URL is password protected now ;)

hehehe I wonder why

Email and messaging (email is better) at https://www.youtube.com/user/iwanPlays/about

You rip your pants, you need to go across the street and get a new pair without anyone seeing you. That's basically it. Fun little game!

Ripped Pants at Work is a fun little indie game that offers just a bit of a challenge that makes it worth playing!

There isn't anything in terms of a story but you defintely feel for your character since they ripped their pants while at work. The controls handle pretty well and the AI changes their predetermined paths based on the choices you make in the game, which is pretty cool for an indie game to have.

I wish there was some kind of soundtrack or sound effects to the game and of course more levels, but the game was made in one week so that's understandable that these were tabled.

All in all, Ripped Pants at Work is an enjoyable experience and I would definitely play more if there are future updates!

I made a Let's Play of Ripped Pants at Work so check it out and let me know what you think!

Great video! Thanks so much for playing!

Just gotta duck and dodge my way to the clothes store, as long as Phil from accounting doesn't see we'll be fine.

Phil will never let you live it down. Thanks for playing!

Thanks for playing! Glad you had fun with it!

To be honest i thought this game would be a bit more difficult, but even though it wasn't it still was fun playing through it, kinda sad that it only was 1 level but i've seen that you're tailoring up a bigger version, which sounds interesting :D

Thanks for playing! I really appreciate it :D Yes I am currently stitching together a bigger version that will hopefully have a bit more variety when it comes to challenge!

Reply
The Temps5 years ago

Really enjoyed this little game!! Would love to see more levels or workplaces in the future, but had a fantastic time playing this! Hope you enjoy the video!

Thanks so much for playing and I'm glad you enjoyed it! I'm currently tailoring up a bigger version of this game that will hopefully be available sometime in the near future

I loved this game, I really connected with the struggle of exploding pants.

Thanks so much for playing! Great video :D

Really great game! It was a little easier then i expected but still had some HILARIOUS times.

Here is my little lets play of this game if you're interested.

That was wonderful! Thanks so much for playing! Also I'm really happy you fell in the manhole

How do I unzip the file?

This game was great ! Bravo !

Thanks so much for playing! Glad you enjoyed it :D

Indeed, Ripped Pants at Work is fun and catchy to play :D

if you've downloaded it, you should have a .zip file. So just unzip that file, and inside there should be a .exe application file. Double click that and when a box pops up, hit the "Play!" button. Let me know whether or not that works

What do the words say? At the bottom, is there a button that says "Play!"?

This game was great, dude. I love the arcadey fast paced attempts and restarts.

The only downsides are audio and only 1 level :( But I managed to find some other ways to have fun with the game >:D

Video for you guys! Also, the stuttering in the video is on my end. I messed up the recording a bit, nothing wrong with YT or game performance. D:

Thank you so much for playing! I'm actually thinking about making a bigger version of this game, and if I do, you most definitely WILL be able to push people down the manhole

I played this game and absolutely loved it!! I hope there is more of it to come!! :)

Thanks for playing!!! Great video

Love the idea, think its got massive potential !

Thank you so much! I'm glad you liked it :D

Haha yeah I would definitely love some reaction sounds in this! Thanks so much for playing! 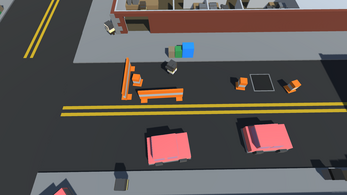 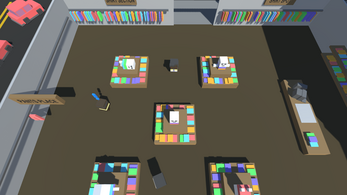 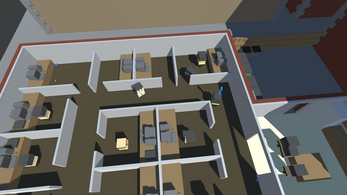